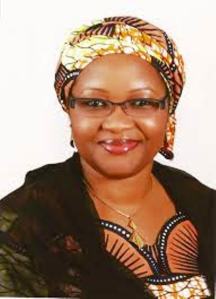 Nenadi Esther Usman is a Nigerian politician from Jere in Kaduna State, Nigeria. She was elected Senator for Kaduna South in the April 2011 elections, running on the People’s Democratic Party (PDP) platform.

Nenadi Usman began her education in Jos, then later Kagoro, after which she attended the Federal Government College, Jos, Plateau State. She later acquired her first degree in Geography at Ahmadu Bello University, Zaria and later a postgraduate diploma from University of Jos. She was the Managing Director of Dana Ventures then later Executive Adviser in Kaduna State in 1992. She was also the Executive Adviser in 1993 then the Principal Personnel officer FCDA from 1994 to 1998.